Hello everyone!  I am delighted to be back on the Winnie and Walter blog today sharing more creations using the new products from their November Release!

I wanted to start off by thanking Shay for having me join in the release, so I created a CAS thank you card using In a Word: Thanks (the stamp set). 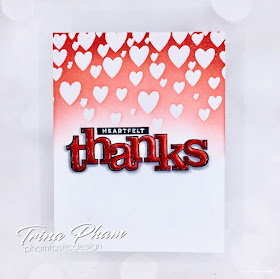 Stamped the outline thanks with Copic friendly black ink on an A2 size X-press It piece of cardstock and coloured in with red Copic markers. 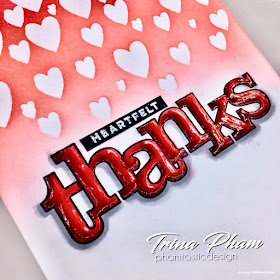 The hearts from Scenery: Seeing Hearts were heat embossed with clear embossing powder.  Abandoned Coral and Candied Apple distress inks were then blended over top for an ombré look.  Wiped off excess ink with a tissue.  Heartfelt from Sentimental: Thanks was white heat embossed on a black strip.  This set was free with qualifying orders during Black Friday/Cyber Monday sale, and will be available for purchase in the future.  For added dimension, Crystal Glaze was added as the finishing touch. 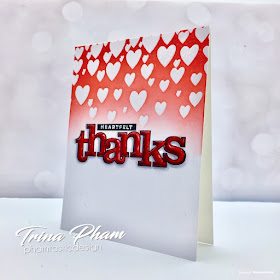 Since there are coordinating In a Word: Thanks cutaways, I created a second CAS thank you card with it. 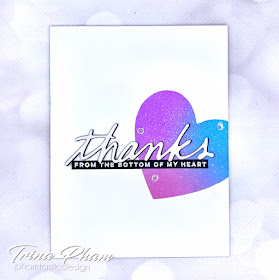 Thanks was die cut twice: one from black and the other from pearlescent white cardstock.  They were offset for a shadow effect which helps to make it stand out.  Once again, the sentiment from Sentimental: Thanks was white heat embossed on a black strip. 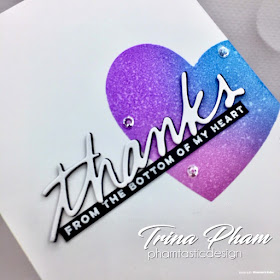 Next a reverse heart mask was die cut from masking paper using True Dotty Heart cutaways.  Placed the mask off the edge of a regular white A2 panel, then blended Picked Raspberry, Wilted Violet and Salty Ocean distress inks.  For some sparkle, spritz with a DIY shimmer spray of Perfect Pearls and water.  Removed the mask and added a few clear sparkly sequins to finish. 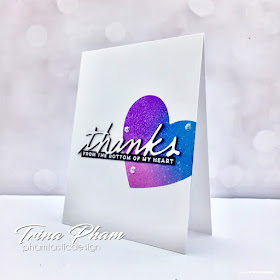 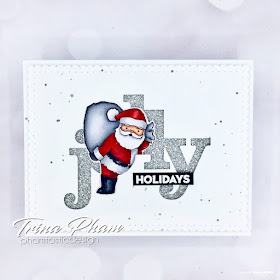 Instead of having Santa replace the "o", I thought it would be fun to have him stepping out of the Jolly cut out.  Started by stamping Santa from Snowy Holidays with Evelin T Designs with Copic friendly black ink.  Coloured him with Copics, then die cut out with the matching cutaway. 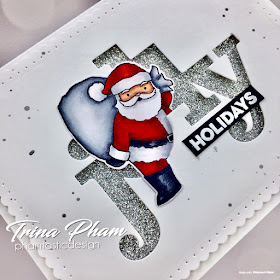 A scallop panel was then die cut from Bristol paper using Essentials: Audrey Cutaways.  Jolly was die cut from that then popped up with foam adhesive over some silver glitter paper on a white card base.  Holidays from In a Word: Happy (the stamp set) was white heat embossed on black.  Some silver splatters finished off the card. 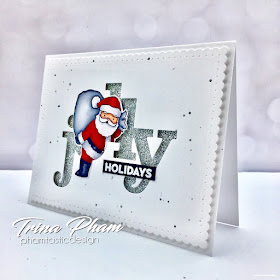 In keeping with the magic and wonder of the season, I thought a bokeh background would be suitable.  Rooted in photography, bokeh is the blurred or out-of-focus areas of an image.  I've done this background before using circle stencils and white pigment ink, but I thought I would try achieving the effect with the VersaMark Resist/ghosting technique.  Not sure I succeeded, but it was easy and fun to do. 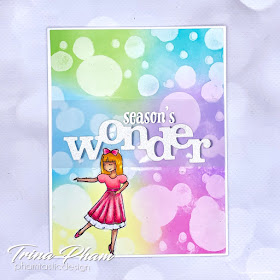 Paper that does not absorb ink easily is best for this technique.  Glossy cardstock works, but I had some coated cardstcok given to me from my freind Christine and that was what I used.  I started by randomly stamping the images from Secenery: Dotty in several sizes with VersaMark ink.  Allowed it to dry before applying distress inks (di) in rainbow colours with a mini blending tool.  The VersaMark ink resisted the colours, leaving varied light areas.  I may have gotten a little carried away with the amount of images I stamped. 😂   Excess ink was wiped off with a tissue. 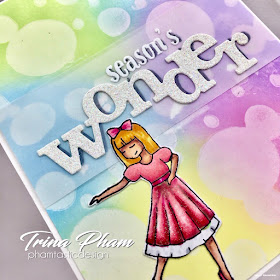 Season's from Winter Woodland was heat embossed with white embossing powder on a vellum strip.  In a Word: Wonder cutaway was die cut from white glitter paper and adhered to the vellum.  Instead of die cutting a shadow piece, a grey Copic marker was used to add the shadow on the vellum from the backside.  Stamped, Copic coloured and die cut the ballerina from Nutcracker Kisses with Evelin T Designs to finish. 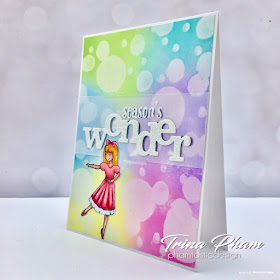 The background was not only easy, but effective, so I created two more cards.  I used the sentiments from In a Word: Grand Merry.  On this first card, I tried it without the vellum. 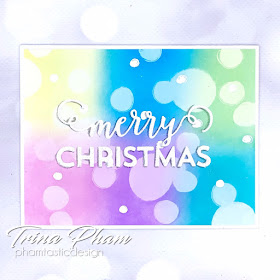 I think it looks better with vellum.  So on this final card, I added the vellum back.  I also changed up the design, and took the smaller rectangle from Essentials: Katharine Cutaways and die cut form the panel then matted it to white cardstock, leaving a 1/8" white border.  Stamped, Copic coloured and die cut the yetis from Yetitide Greetings with Evelin T Designs to finish. 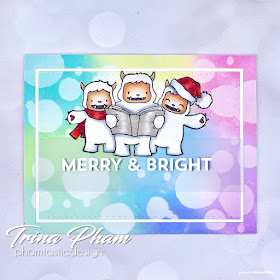 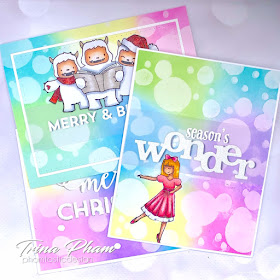 This post was a bit longer than I had intended, but good news is you've reached the end!  Thank you for taking the time to visit, especially during this busy time of year and with Christmas only four days away!  Wishing you all a safe and joyous holiday season! 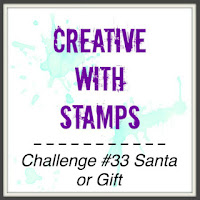 Thank you kindly for taking the time to leave me some love and bring a big smile to my face! 😁