Hello everyone.  I’m thrilled and honoured to be back as guest designer for the September challenge at Christmas Craft Creations (CCC).  Their fun theme this month is Shaped Card.

I have not made a shaped card in a very long time, and since I just got the Snowglobe Bases dies from Memory Box (MB), I was eager to put it to work.  Here's my card. 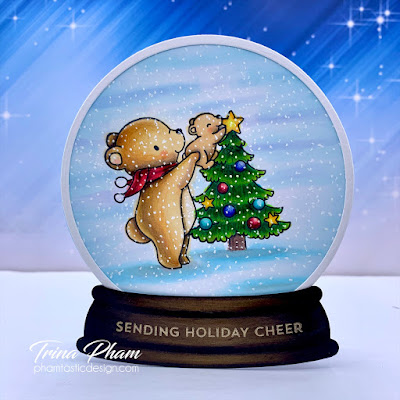 To start, the largest snowglobe base was die cut from a scrap of X-Press It cardstock and coloured in with Copic markers.  The bear image and tree from Mama Elephant A Beary Christmas was in my stash.  I had stamped it with Memento Tuxedo Black ink on X-Press It cardstock and coloured with Copic markers during Kathy’s daily marker coloring challenge.  I just added the “swirling snow” trying to create that look when a snowglobe is shaken up... the idea looked better in my head. 😂  Added snow with a white gel pen then die cut out with the largest circle die from MB Circle Basics. 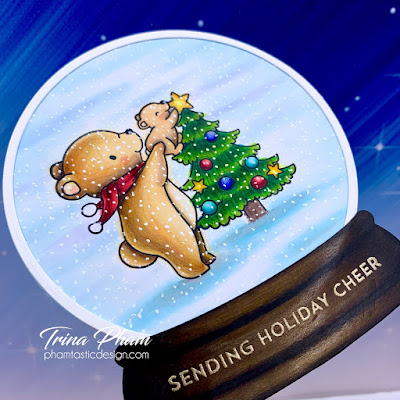 The same circle die was then used to partial die cut from a top folding white card base.  Made sure the cutting edge extended past the folded edge and stopped short of the bottom cutting edge.  I was a little worried the wafer thin die wouldn’t cut through two layers of thick cardstock, but luckily it did.  Traced the snowglobe base onto the card base before fussy cutting out.  Heat embossed the sentiment from My Favorite Things Bitty Holiday Wishes with Liquid Platinum embossing powder.  Took the largest and second largest circle dies from Circle Basics to create a circle frame from a scrap of mixed media paper.  Assembled the card to approximately 4.25"x4-7/8" finished size. 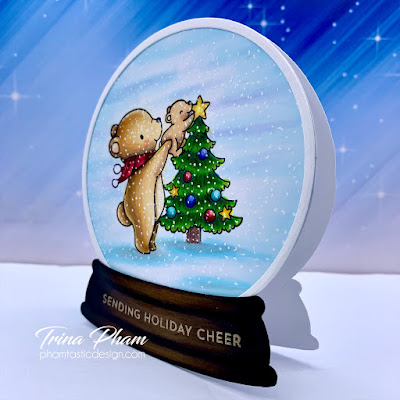 I was pleasantly surprised how well this turned out... even my hubby (who couldn’t care less about cards), said he liked it!  So are you ready to join in the fun?  For more inspirations from the design team, head on over to the challenge post HERE.  Thank you for stopping by.  Have a wonderful day. 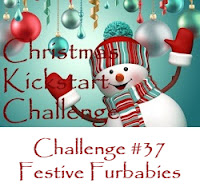 This is such a beautiful card, Trina! Really lovely colouring. I'm so happy you're joining us as a guest designer this month. - Charlotte/Lady Joyful

Brenda in IN said...

This is the cutest card! What patience you have to make all that snow, it looks so real. The snow globe is a great idea for your shaped card.

Aww such cuteness, lovely shaped card. Thank you for being our guestdesigner at Christmas Craft Creations

Trina this is the most adorable card....The snowglobe shape is fabulous and the cutest of 'Bear' image x. The swirling snow looks fabulous and not only in your head Trina....LOL x.

And.....Congratulations on guesting with this super cute and creative card x.

Congrats on your win and guest designer spot at Christmas Craft Creations, Trina!! Just love your sweet scene in the snowglobe, especially your sky and coloring on the bears!!

Oh my!!! Such AMAZING snow globe card!!! You made a stunning work with your dies and stamp!! Thanks so much for sharing the way you made the shaped card base :)The falling snow looks great and that snowglobe base seems just real, stunning colouring!!

Oh, so pretty and sweet! Love your Christmas snow globe card, which looks so real! Beautiful coloring and the bears are so cute! Huge congrats on your GD spot!

I love your beautiful snowglobe card! Sweet image inside with these cute bears, and awesome coloring!

This has got to be the most adorable shaped card ever, Trina! Beautifully colored and I love the snowy look! Congratulations on your Guest Designer post!

I love this creation! The globe is amazing and the images are lovely!

wow, Trina awesome job creating a swirling snow globe scene. your copic colouring is amazing. I love the base die, it makes for a cool card.
Congrats on being GD :)

Super cute, super sweet shaped card!! Thanks for linking up to our September challenge at Die Cut Divas.

What a gorgeous card Trina! You ticked all the boxes - shape and cuteness as well as your own perfection of course!

Wow Trina! you nailed the blowing snow in your snow globe what a beautiful card! xx

What a beauty! I'd be pleased too. Thanks for playing again at Christmas Kickstart - great to have you here, Jo x

I love this! You have really captured the flurry of snow in a snow globe. Gorgeous colouring, too. Thanks for joining us at ABC Christmas Challenge!

How very sweet - wonderful globe card. So glad you joined us for our "Anny Holiday" challenge at Die Cut Divas https://die-cut-divas.blogspot.com/2020/09/its-all-kind-of-holidays-time-with.html.

Congratulations on the GD spot for the Christmas Craft Creations, Trina!
Such a beautiful snowglobe card! Your Copic coloring is so good that the wooden base looks very realistic! The “swirling snow” is a fabulous idea and it does look like it. The lots of white gel pen snow is so effective. The mama bear and the baby bear are sooo adorable!
Hideko xx

Oh my (Christmas topper) stars, this is fantastically adorable!

Really cute and I love the snowglobe shape. Such a fun and festive card. Thanks for joining the fun at the Christmas Kickstart Challenge. Hugz

Congrats on being a Top Pick at Christmas Kickstart with this cutie, Trina!!

Congrats on your well-deserved GD spot, and for being 'Top Pick' at Christmas Kickstart! Your little bear is perfect for the snow globe and I really like how you used your Copic markers to create the background! Love all the snowflakes, too :) Another darling card, Trina! Barb xx

FANTASTIC card Trina! I LOVE this sweet snowglobe. Your colouring is always inspiring! Congrats on being GD at Christmas Craft Creations. xx

What a fab shaped card. Thanks for the explanation.

Adorable card. Those bears are super cute! I think you did a great job with the swirling snow. Thanks for joining us at DieCut Divas.

So cute! Lovve the snow!
Thanks so much for playing with us at the ABC Christmas Challenge!
Helen x

Hello! My name is Trina. Formerly at My Crafting Closet, welcome to my current blog where I continue to share my handmade cards. 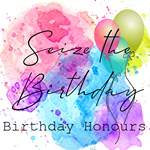 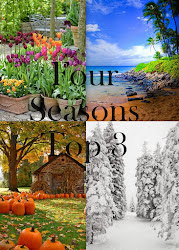 At times I use products that have been gifted to me for designing purposes, but I use and post what I like. I also participate in affiliate programs. This means when you purchase products through an affiliate link on my site, I will receive a small commission at no extra cost to you. Affiliate list with links in tab at top. Thank you so much for your support.