Hello there.  This is the reminder post as guest designer at Christmas Craft Creations (CCC) for their September Shaped Card challenge.

I used a new NBUS stamp set from Kraftin Kimmie called Christmas Blessings and went old school creating a pyramid card... at least that was what it was called when I first made it way back when. 😂  These days they are referred to as a teepee card.  Here’s my card. 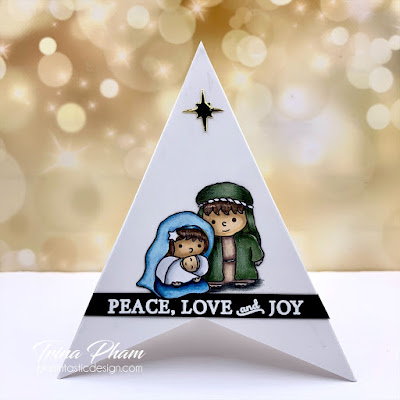 I made this from memory, but if you googled teepee card, I’m sure you can find tutorials for it.  The three 4” squares that form the base were cut from Bristol paper.  Scored each square once diagonally corner to corner, fold along the scored lines then assembled to the pyramid shape.  I tried using pattern paper and even ink blending to decorate the background like you see on these types of cards, but the image got lost in it, so I just kept it really clean and simple (CAS). 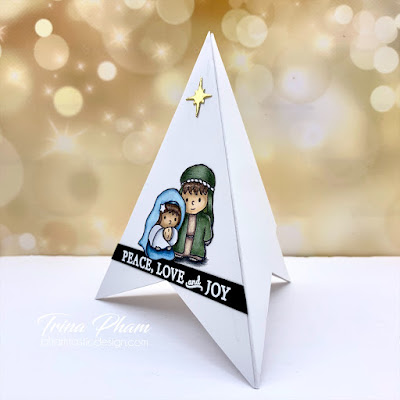 The image was stamped with Memento Tuxedo Black ink on X-Press It cardstock, coloured with Copic Sketch markers and Polychromos pencils, then fussy cut out.  The sentiment from the same set was white heat embossed on black cardstock then trimmed down to a strip.  I wanted the front to be seamless so I traced the folded down base onto Bristol paper and hand cut it out.  The star (unknown) was die cut from gold foil paper.  Assembled the card and added shading below Joseph with a gray color pencil to finish.  I couldn’t find my velcro, so held it together with temporary tape to take the picture,  but when I send it, the velcro will be added.  Here it is folded down to fit into an envelope. 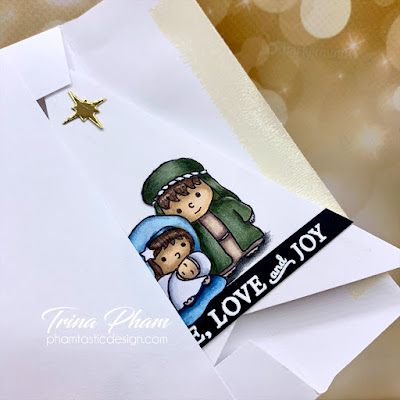 I want to say a big thank you to Charlotte and the CCC team for having me guest design this month.  Shaped cards are so fun. The challenge ends on Tuesday October 13th at 6pm GMT.  For more inspirations, head on over to the challenge reminder post HERE.  Hope to see you in the gallery.  Thank you for visiting.

Your shaped CAS card is juts adorable!! Love it's sweetness and the clever shape!

This is so cute. I have never seen this shape before.

This card is amazing! I love the feel of it.

love your pyramid card Trina, one on my list to try :) and your images are so cute.

Fun pyramid, Trina, and I love the coloring on your Holy Family!! Great design on this fabulous shaped card - congrats again on guest designer!!

The most adorable and super cute Christmas card with a fabulous and unique shape x.

So impressive Trina, to make a shaped card that is beautifully CAS too. The nativity group is adorable and I love your addition of the golden star and the perfectly fitting sentiment strip. Vicky x

Your pyramid card design is such a fun idea! Beautiful coloring with your Copics and pencils, too! Darling Christmas card, Trina!

This is so sweet Trina. I love the shape of your card ... it looks like a Christmas tree. And those images are SO ADORABLE! xx

Fab card Trina, lovely design and colouring. Thanks for being our GD this month.

Such a perfect shape for a holiday season card. It immediately calls to mind thoughts of both (Christmas) trees and stars alike.

Hello, my name is Trina!

Formerly at My Crafting Closet, welcome to my new blog. To view posts from my previous blog, click HERE. 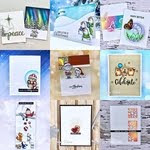 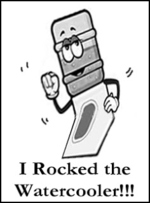